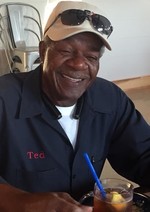 Reverend Theodore Hartford “Ted” Tims was born on November 28, 1937 in Marengo County, AL to the union of Margaret (Smith) and Rembert Tims. He is preceded in death by his parents, and his grandparents Earle (Norwood) and Will Tims. He passed away on Monday, April 8, 2019 surrounded by his family.
Theodore was a graduate of Marengo County High School and Troy State University. He was drafted into the United States Army in 1960 where he served for 24 years and was a Vietnam Veteran. He retired in 1984 as Sergeant First Class and received many awards and honors including the Army Commendation Medal. After retirement he worked in the trucking industry and ran a successful business for more than 30 years.
He confessed Christ at an early age and was baptized at Glovers Primitive Baptist Church in Thomaston, AL. He was ordained in the gospel ministry in 1980. He was an active member of Greater St. Mark Missionary Baptist Church in Mobile, where he served as Associate Minister under the leadership of Pastor Percy D. Johnson Sr.
He leaves to cherish his memory his wife of 56 years, Mary D. (Mallard) Tims; children: Minister Tyloria Tims Crenshaw, Dr. Suporior (Leo) Campbell; Pamela (Reginald) Mack; and Ronald Tims, all of Mobile, AL; Cynthia Tims of Los Angeles, CA; Theodore Tims, Jr. of Tacoma, WA; and Stephen Woodyard of St. Petersburg, FL.; Sisters, Bernice (the late Earl) Eaton and Gloria Hollis both of Mobile. Devoted cousins Jimmie Lee Kennedy of Copperas Cove, TX and Tasville (Junior) King of Houma, LA; one goddaughter Robin Feagin; 17 grandchildren, great-grandchildren, a host of nieces, nephews other relatives and friends - one devoted, Diane Richards; and his family from the Port City Containers.

This obituary is protected by copyright by Mobile. Proudly Serving the Community of Mobile. Mobile is located in the state of Alabama, United States.

All rights reserved. This obituary is also archived at obittree.com