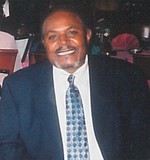 George A. Parker (Sonny) was born May 18, 1936; a native of Sun, Mississippi and a resident of Mobile, Alabama. On March 22, 2019 he passed away peacefully at home surrounded by his beloved family. He was preceded in death by his mother Annie L. Kennedy, and his father Alfonzo Parker and sister Laura Lee Grissel.
His 82 years were blessed. He was married to the love of his life, Jessie Mae Parker, for 59 years. He served in the US Army as a paratrooper and was honorably discharged in December of 1956. He worked at the National Gymsum Company, which later became Armstrong Industries as a machine operator; and retired after 30 years. He was a Jack of All Trades. He refurbished a 1949 Chevy pickup, which was given to him by his stepfather, Mr. Kapell Kennedy, and maintained it over the years. He reconstructed and redesigned the family home from closing the carport in and making it into a den; constructing a double driveway with a carport, building a shed, a patio, a deck, and added on 2 additional rooms among many other odds and ends. He was a member of St. Joseph Missionary Baptist Church.

We would like to express our deepest gratitude for the cards, flowers, and other expressions of love and kindness we have received during this time. Please continue to keep us in your prayers.

This obituary is protected by copyright by Mobile. Proudly Serving the Community of Mobile. Mobile is located in the state of Alabama, United States.

All rights reserved. This obituary is also archived at obittree.com